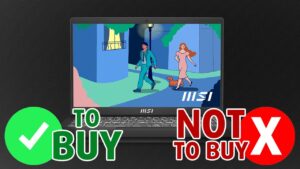 MSI has always had a unique approach to marketing, designing characters for their gaming notebooks and featuring artists who make artwork for their Creator laptops. The Modern 15 from MSI, however, barely has any Creator capabilities, featuring less powerful processors and an entry-level display.

The Modern series has always targeted the more affordable segment, but we hope that as time goes on, we can have entry-level general-purpose notebooks that can scratch that Creator itch, which is perfect for a beginner.

Today we present you with LaptopMedia’s top 5 picks about the MSI Modern 15 (B12M). 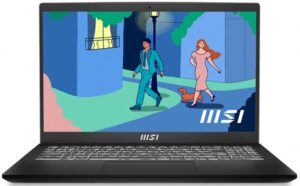 The notebook has a very sleek appearance, with a chassis painted in “Classic Black”. It is entirely made out of plastic, but the rigidity is on a very good level, with both the lid and the base being tough enough. The lid opens easily with one hand, with it also working as a lever, lifting up the rear end. The design is simple, with sharp edges, rounded corners, and a very good-looking MSI logo, which is embedded into the lid and comes in silver metallic color. In terms of portability, the laptop weighs only 1.70 kg and has a profile of 19.9 mm. Going down to the base, we see a keyboard with a white backlight, a NumPad, and decent spacing between the buttons. The keys themselves have average key travel, but the feedback is clicky, so the overall typing experience is pleasant. The touchpad has a large surface area, smooth gliding, and accurate tracking. The cooling setup consists of two large copper heat pipes, which cover the CPU. They connect to a single fan and a heat spreader that sits on top of the VRMs. All in all, a pretty good solution for any ULV CPU.

The Core i7-1255U appreciates the cooling, reaching good clock speeds, while not even coming close to overheating.

The hotspot on the base caps out at only 40.9°C, while the fan on the inside didn’t get that loud at all. 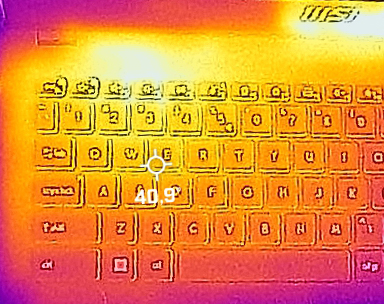 The upgradeability also is sacrificed, as the Modern 15 offers only soldered RAM, along with a single M.2 PCIe x4 slot, which is already full. It also supports only Gen 3 drives.

Here is our teardown video, which shows the disassembly procedure, including getting access to the M.2 slot.