Our last comparison featured two top-notch processors – AMD Ryzen 7 2700, the gold medalist in our Top Laptop CPU Ranking, and Intel Core i9-8950HK, the first addition to the 8th gen Intel Core i9 family. We return with another worthy competitor to the AMD option in the face of the 8th gen Intel Core i7-8750H. We would like to first have a look at their specifications and then juxtapose their results in our 2 benchmark tests so as to find out which is the better CPU option. For starters, AMD Ryzen 7 2700 is based on AMD’s new 12 nm Zen+ architecture with a total of 8 cores and is able to execute up to 16 threads simultaneously thanks to the Simultaneous Multithreading (SMT). What’s more, it runs at a base frequency of 3.2 GHz that can be boosted up to 4.1 GHz. The specs sheet is complemented by 16MB of L3 Cache, support for up to a dual-channel DDR4 memory controller, as well as TDP rated at 65 W.

Now let’s cover the specs sheet of its opponent briefly. Intel Core i7-8750H is part of the 8th gen Coffee Lake-H architecture featuring six physical cores instead of the just four found on the Kaby Lake CPUs. Additionally, the base frequencies go up to 2.20 GHz, while the turbo speed can reach up to 4.10 GHz. Other specs include support for dual-channel DDR4-2666 memory, 9MB last level cache, 14nm FinFET manufacturing process, as well as TDP of 45W. As for the iGPU, here we see the Intel UHD Graphics 630 clocked at 300-1150 MHz. 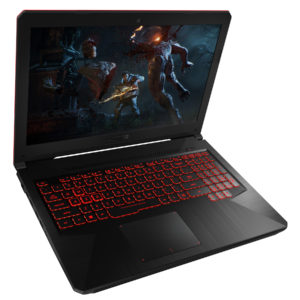 For the purposes of this comparison, we have chosen to compare the performance of the two chips found in Acer Predator Helios 500 and ASUS TUF Gaming FX504 respectively. As you can see from the charts above, AMD Ryzen 7 2700 outperforms its rival with around 42% when it comes to 3D rendering (tested with Cinebench 15). On top of that, the former shows 10% faster results in the Adobe Photoshop test.

Taking into account the results both processors score in our benchmarks, AMD Ryzen 7 2700 shows better performance in 2 out of 2 tests compared to the i7-8750H option, therefore it has every right to be announced as the winner in today’s battle.

You can check all currently available notebooks equipped with the AMD Ryzen 7 2700 in our Laptops Specs system over HERE and all featuring the Intel Core i7-8750H over HERE.