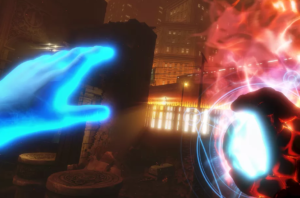 The world of virtual reality will never be the same. The Oculus Rift headset now has a new comrade – the Oculus Touch hand controllers. There are two of them – one for each hand and they feel like a natural extension of the arm.

Each controller features two main digital buttons (named A and B on the one side, and X and Y on the other), one analogue stick, several additional buttons and sensors that follow the motion of your fingers.

What the sensors do is detect whether your finger is on the controller or not. This way if you want to, for example, give someone in the game a thumbs-up, you just physically give a thumbs-up. The sensor will detect that your thumb has been removed from the controller and perform the necessary action. The controller offers a wide variety of similar predefined actions, which is something unseen in the virtual reality world up to now. Another thing the controllers do is vibrate.

The usage of the other buttons is pretty straight-forward for people who have experience with Xbox / PS gamepads.

Up to now there are 54 games that are fully-compatible with Oculus Rift, with more expected to come in the following months.

The Oculus hand controllers can now be bought here for the price of $199.99.