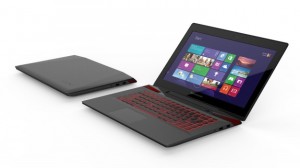 Arguably, one of the most successful budget gaming notebooks on the market is the Lenovo Y50. This laptop is surely a great buy with its sleek design, thin profile and powerful hardware, but most of the configurations lack a quality IPS panel, which is a necessity even for a casual gamer.

We’ve managed to get our hands on an interesting info about some upcoming configurations of the Y50, thanks to some LaptopMedia insiders. For starters, there will be 3 models featuring the new GTX 960M graphics card with 4GB GDDR5. Two of them will be packing UHD resolution along with 512GB SSD or 1TB+8GB SSHD and the other one will offer an IPS LCD Full HD panel. There’s good news for those who aren’t willing to spend a lot of money, because Lenovo will be offering the current Y50 with refreshed Intel Core i7-4720HQ processor, 1TB + 8GB SSHD and most importantly – Full HD IPS LCD panel for around €1000.

As for pricing, we expect the UHD version with 512GB SSD to be around €1400, as for the other one with 8GB SSHD – around €1200. Y50 with GTX 960M and FHD IPS panel is expected to have a price tag of €1120. All models are packing the Intel Core i7-4720HQ CPU, which is slightly more powerful than the Core i7-4710HQ. Also, the new Y50s will be out in the beginning next month, but it’s quite possible that Lenovo will ship them a bit earlier say, for example, until the end of this month.

It’s interesting to note that Lenovo is refreshing their current models with the Haswell family CPUs while some competitors are relying on the new Broadwell generation processors. We will see how that will turn out for the Chinese tech giant.

is this legit? I want to buy this laptop and after seeing this I’m thinking of waiting to get the new one with the IPS screen, is it possible to know if this is happening soon since I have to buy a new laptop asap?

Hi, the information is quite legit, but unfortunately we cannot give you an accurate time frame. Although, we think that most probably Lenovo will launch their IPS variants within 2 weeks or so.

alright, I guess I’ll just wait for a little bit since despite reviews and Lenovo problems, those specs seem way too good to resist, thanks for the reply!

Have you heard anything about this recently? I’ve been wanting to get a Y50 as well but the new specs seem too good to buy the current version. It is well past March now, do you reckon these will be made available any time soon?