Today we want to take a quick look at the new Google Pixelbook. The Google Pixelbook is essentially a Chromebook but unlike most Chromebooks, this is a rather high-powered device. It’s a very sleek and stylish looking notebook with an extremely portable design. It focuses on Google Assistant AI and Google Play ecosystem.

Let’s start with the design. The Google Pixelbook features an all-aluminum body with Corning Gorilla Glass details on the back. This is Google’s thinnest laptop ever and one of the thinnest laptops you can find on the market measuring just 10.3 mm (0.4 inches). The notebook weighs only 1kg (2.2 lbs) making it ideal for travelers.

The Google Pixelbook features a 12.3-inch screen with Quad HD resolution and a 360-degree hinge. The aspect ratio of the display is 3:2 so the resolution is actually 2400 x 1600p rather than the conventional 2560 x 1440p. This resolution and screen size translate into 235ppi. The 360-degree hinge is responsible for the so-called “4-in-1” design of the notebook. It is basically what we call 2-in-1 but Google has decided to brand it as 4-in-1 because of the four modes that we are used to – laptop, tablet, tent and presentation.

We said that the Pixelbook is rather powerful. It is true compared to most other Chromebooks and small form-factor 2-in-1s. It is powered by up to a 7th gen Core i7 processor. Google hasn’t exactly revealed the models of the CPUs but they are most likely the Core i5-7Y54 and Core i7-7Y75. The amount of RAM on the Pixelbook is either 8 or 16GB which is usually what you get as storage for other Chromebooks. Speaking of storage, not only that you get a lot more but you also get a lot faster storage. You can go up to a 512GB SSD which can optionally be a NVMe drive.

The Pixelbook features a 41Wh unit and Google claims up to 10 hours of battery life. The notebook also features a fast charging option which can juice up your device with up to 2 hours of battery life in just 15 minutes via the USB Type-C charging port (as advertised). Some additional features include a 720p 60fps camera for video calling, a backlit keyboard with 8mm travel distance and a glass surface on the trackpad.

The Google Pixelbook can also work very closely with the Pixel smartphone. The notebook and instantly tether to the mobile data of the phone when out of Wi-Fi coverage.

The Google Pixelbook is up for pre-order and will be released on October the 31st with prices starting from $999 (Core i5, 8GB RAM, 128GB SSD). You can check out all available configurations and their detailed specs in our Laptops Specs system: 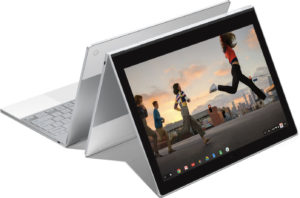