Nowadays, emerging technologies require the use of hard drives with even higher capacity. No matter if we store pictures, movies, video games or other data. Besides capacity, we need speed, too. Usually, we can make a cup of coffee or read an article or two, while waiting for the file to be transferred. Modern people, however, can’t afford to wait. Time is money! Option number one is buying an SSD. But for now, its price is too expensive and the device is not able to reach a good balance between speed, price, and capacity in one. The so-called SSHDs (Solid State Hybrid Drive) are here to help us. They offer a big storage capacity and at the same time great speed for opening programs, apps and even loading the OS, which a standard hard drive can not reach.

Today we will acquaint you with the 2.5-inch SSHD Seagate model – FireCuda Gaming. The version that we have chosen boasts the capacity of 2 TB. Seagate is a company that has been involved in the HDD business for quite some time, so we are sure that this review will be really interesting…

A while ago, the Seagate company revealed a device, which combines a small SSD with a hard drive. The main aim of this innovation was to provide the speed of expensive SSDs with the capacity of more cheaper hard drives.

The configuration is similar to the one that is found in modern computer systems, where there is an integrated SSD with a small capacity, which includes an OS and more frequently used user programs in addition to an HDD with a great capacity for big files, which we don’t need that often – for example movies, pictures, backup, etc. The working principle of the hybrid drive implements all of this in small form factor (in our case – the standard 2.5-inch hard drive) and unlike the example that we mentioned, here the user should not bother moving the commonly used apps from the hard drive to the SSD and back again. SSHD devices contain algorithms for caching in their firmware and they decide where and when to move the information. In that way, the hybrid configuration appears like one device in the OS and SSD shows like a huge cache storage, which is non-volatile and it won’t be deleted when the power is stopped. Their size makes them perfect for use in consoles and PCs, and what is more, there are 3.5-inch versions.

You will find different kinds of SSDs and hard drives HERE.

A lot of people get scared when the question of changing laptop parts appears. A lot of modern PCs have a special service hatch and thanks to it you can change your hard drive or RAM sticks in a very easy and quick way – by just removing one bolt. However, we wanted to show you the more common case, so we opened ASUS X555D. Here the maintenance lid only serves to let you add or replace the RAM chips. The procedure is longer than the one with the special service hatch, but it’s not hard at all. In the video below you will see how this happens and we remind you that the only thing you should be careful with is the ribbon cables, because they are very brittle and they can break under high pressure.

In this section, we compared the performance of FireCuda SSHD 2 TB with that of the Hitachi 5K1000 1 TB hard drive and Samsung CM871a 256 GB SSD, using the synthetic benchmark CrystalDiskMark. It tests read and write speeds in a number of different scenarios. Reading and writing in consecutive sectors, as well as writing and reading small parts of information in random sectors of the drive. The last one shows the merits of SSDs over conventional hard drives because it requires the search of sectors, which are scattered in the device and in that way the HDD is being slowed by its mechanical working principle.

The synthetic benchmarks are not effective when testing hybrid drives because they can not take advantage of the NAND elements in them and they actually show us only the work of the hard drives.

To check the capabilities of Seagate FireCuda SSHD 2 TB, we conducted tests in a natural environment. We loaded some more famous headlines on our testing configuration. The games that we tested were: Rise of the Tomb Raider, F1 2015 and Grand Theft Auto V. While testing Tomb Raider and F1 we registered the loading time when we started the game. What is more, in the first one we tested the loading time of a saved game, when all devices that we were testing had to load the same save. In F1 we registered the launching time of the built-in benchmark as well, and in GTA V when one starts the game, it automatically opens the last saved game. To measure these times we used the good old stopwatch. 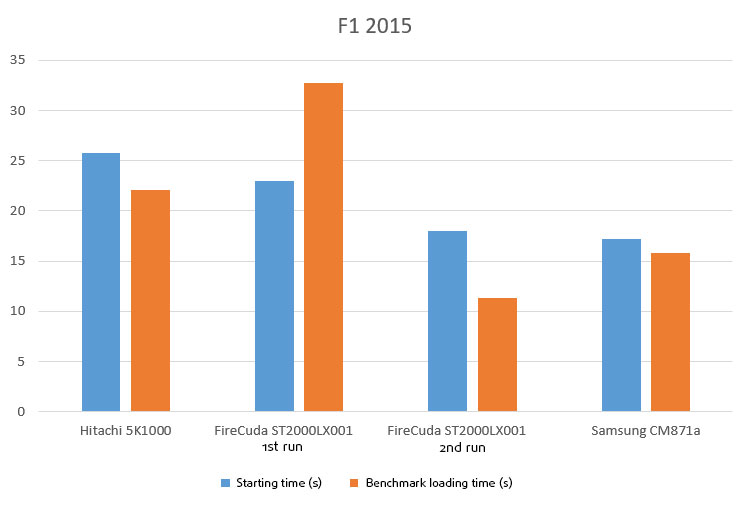 Each of the three tests was conducted twice using the hybrid Seagate FireCuda drive. The aim was to check the loading time when the files are on the hard drive and to compare it to the one when the device has transferred the information onto the NAND’s chips. As we can see from the charts, when reloading a title, the hybrid solution reaches the speeds of the many times more expensive SSD, and we even noticed, when running the benchmark of F1 2015, that it even managed to finish the operation faster than its rival.

In the next test, we covered the probably most annoying period – booting the operating system. This test was executed by a program called BootRace, which registers the time between the switching the computer on and the last program that has been loaded. Here we considered only the time for loading of the Windows files.

We performed a clean Windows 10 install to ensure as accurate test results as possible. Again, to comply with the SSHD principle of work we took into consideration the loading time at the first booting and at the fifth booting of the system. We see that the test results of the games are confirmed by this examination.

The area in which Seagate FireCuda ST2000LX001 shines is neither data transfer speed nor the “dry” synthetic benchmarks. The purpose of the product is to deliver speeds similar to those of an SSD, which the user will appreciate. It namely gives you faster loading of the operating system and frequently used programs and at the same time, it offers big storage capacity with a price far lower than that of the SSD devices which are on the market.

While making the tests, what grabbed our attention was the system needed four-five starts to optimize the use of the hybrid drive’s NAND chips. The same happened when we started games and programs. Many people make the mistake to compare SSHD devices to SSDs, which leads to disappointments and negative comments, which is actually the reason for the low popularity of this type of products. In this case, the fact that the cached in the NAND part of the hybrid drive information reaches our screens with a speed similar to the one of an SSD device, speaks for the efficiency of this technology. We would definitely recommend Seagate FireCuda ST2000LX001 to users who don’t have a big budget but also want to have enough memory and to take advantage of the SSD speeds.