Back at CES 2016 in Las Vegas, Lenovo came out of nowhere with tons of new devices, but one was particularly interesting, mostly because it’s part of the legendary Yoga lineup. It’s actually not only part of the lineup, but it’s also the flagship of all Yoga’s up to date. Well, some may say it’s just a smaller and lighter variant of last year’s Yoga 900. Anyway, we had the chance to play with the device for a short period of time so here are our initial thoughts on the new Yoga 900S.

From a design standpoint, the Yoga 900S is just a smaller version of the Yoga 900 inheriting the same design language with a few tweaks here and there. The first thing you will notice is that the notebook is freakishly thin and light. The device weighs just 999 g and it’s 12.7 mm thick and probably making it the thinnest and lightest convertible on the market. Well, at least, Lenovo says so and it’s hard not to believe to be honest. 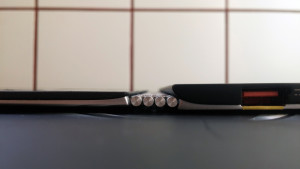 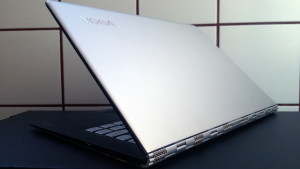 But keeping the weight low was probably a pretty hard task since the casing is plastic all-around. However, this might not be the final choice of materials for the final unit since we are using an engineering sample for our tests. We will know for sure in May when the Yoga 900S is supposedly going to be released with the asking price of $1 099. The good news is that the convertible seems sturdy enough so the absence of aluminum might not be such a problem and the metallic-like plastic mimics aluminum very well and we were fooled by it at first touch.

The iconic watchband hinge to the Yoga devices is present here as well and provides rock solid and smooth transition from laptop mode to tent or tablet stance. It’s not easy to open with one hand, but the tightly pulled hinge guarantees less wobbling when using the QHD 12.5-inch touch panel. Oh, yeah, forgot to mention that the 900S is using smaller 12.5-inch screen down from the 13.3-inch diagonal on the Yoga 900 but keeps the QHD resolution. 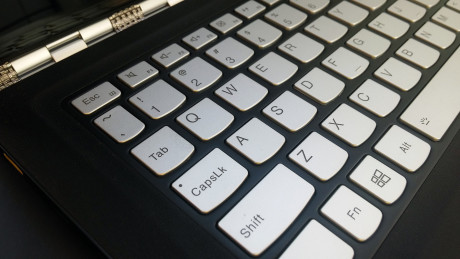 The interior sports sturdy soft-touch leather-like finish. It’s a variant of the wrist rest area of the gaming Lenovo Y900, but not so rugged. It’s way more delicate and pleasant to touch. Also, the touchpad seems reasonably sized considering the size of the machine, but the keys could have been stretched a bit more. The same goes for the key travel – buttons feel a bit shallow but we will make sure to check if this has to do anything with diminished typing experience.

The notebook makes its way back to the Core m family… again. If you remember, the Yoga 3 Pro features a mobile Core m SoC but was a bit of a letdown in terms of performance and battery efficiency. This time around, Intel promises a huge improvement in the Core m lineup thanks to the polished Skylake architecture.

We also had the chance to take a peek inside the laptop and found a 53Wh battery and a 256GB Samsung NVMe PCIe M.2 SSD for ultra-fast write and read speeds. Top-shelf hardware right here. More about that in our upcoming review and disassembly article.

How it looks inside

Since the notebook uses a mobile chip that needs only passive cooling, the better part of the casing is taken by the huge 53Wh battery. There’s also the aforementioned 2280 M.2 Samsung SSD and soldered RAM. 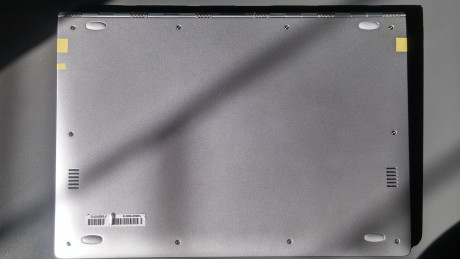 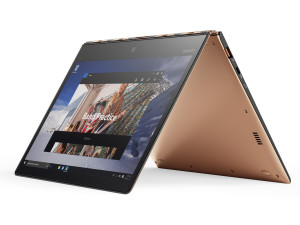 But I agree – the perfect machine (having used it for several weeks).