Could this be the advancement of the decade? Scientists have created the first-ever Quantum circuit

LaptopMedia.com News Could this be the advancement of the decade? Scientists have created the first-ever Quantum circuit
From: Severin Kolakov 22 June 2022 / 23:41 | 0 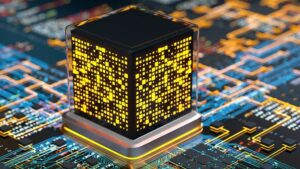 Quantum computers have been a part of technology for a while, being especially good at solving certain types of computational problems, which deal with encryption of data, as well as running tests and simulations on large amounts of data.

The bonus of a quantum computer is that while it can have the 0 and 1 stance like a traditional CPU, it can also change its superposition, giving you a total of four outcomes.

A team of Australian scientists, led by Michelle Simmons, managed to take it a step further, constructing the first ever quantum processor, which acts like and has all of the components of a traditional processor but on a quantum scale.

How did the team do this? Well, it starts off by creating the first quantum transistor in 2012. Now, they used a scanning tunneling microscope in a high-vacuum area, to arrange quantum dots, man-made objects, which can transport electrons. This is done with sub-nanometer accuracy, essentially making a small circuit of dots that need to be precisely put together.

You have to measure the distance between the dots, as well as the atomic structure of each dot. Then, you essentially place the circuit inside a silicon chip. The quantum dots have to be a certain size, otherwise, you run into problems. For example, if the dots are too big, the interaction between them becomes too large and cannot be controlled. On the other hand, smaller dots suffer from randomness, as they cannot send and receive the exact number of electrons needed.

Double carbon bonds were simulated by having less spacing between the dots. The final chip came with 10 quantum dots, using phosphorus atoms. The model of choice was Polyacetylene, due to it being well-known and so we can determine the accuracy of the quantum chip’s ability to replicate the passage of electrons.

This is revolutionary since if you want to replicate a more complex molecule, like penicillin, for example, you would need 1086 transistors on a normal computer, which is more than we have atoms in the observable world. The quantum computer can replicate the molecule with only 286 qubits (quantum bits).

The advancement from a quantum transistor to a circuit was 9 years, while the first ever transistor of any kind was created in 1947, with the traditional circuit following 11 years later.

The new technology can quickly accelerate the time frame when it comes to creating new materials and compounds, being able to run simulations faster than anything we have right now, to see what works and what doesn’t.