Yesterday NVIDIA released the latest version of its Game Ready driver – Game Ready 378.78. The highlights of this release are official support for the new flagship – the GeForce GTX 1080 Ti which goes on sale today (March 10th), support for the recently launched Ghost Recon Wildlands, and improved DirectX 12 performance in several titles.

What is most interesting is the improvement in DirectX 12 performance. According to NVIDIA, an average of 16% performance boost is expected across five titles. Note that these improvements are compared to the drivers that were used when the games were released so the actual boost may be lower and that the specific numbers refer to 4K resolution. 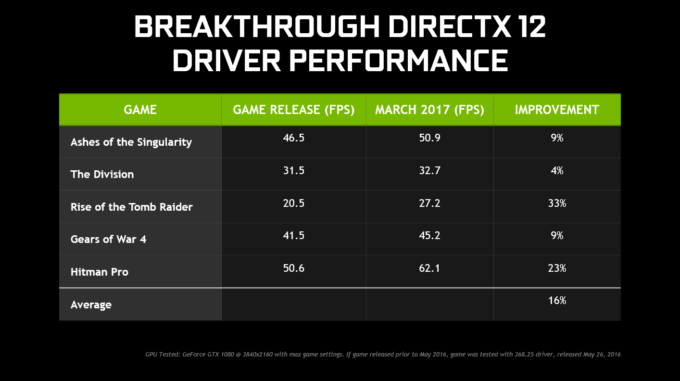 As you can see from the image above, performance increase in Rise of the Tomb Raider is the whopping 33%. However, in games like The Division, the increase is just 4% which is practically indistinguishable.

NVIDIA has also made improvements when using Vulkan. This new API is gaining more and more popularity and even Intel recently added support for it to its HD Graphics. Below you can see a graph provided by NVIDIA which tracks and compares the performance of Vulkan and OpenGL over the last year. 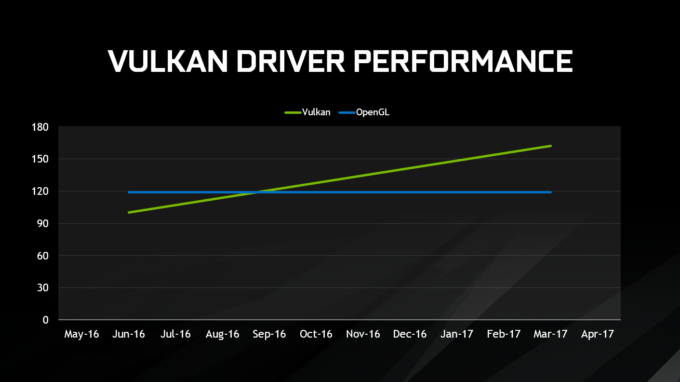 It is clear that while Vulkan was performing worse a year ago now it has improved and surpassed OpenGL which stayed the same in terms of performance over the same period.

You can download the new driver from here: http://www.nvidia.com/Download/index.aspx

You can check out all available NVIDIA products over here: http://amzn.to/2kTctWu